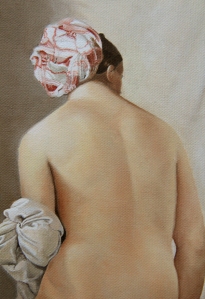 I’ve often read of the value of copying from a Masterpiece and since a major art museum is several hours away, I haven’t done it. I’ve considered copying from a coffee table book but the Graphic Designer in me knows the colours and even the density isn’t going to be accurate. I went on-line and selected a painting that I thought might be really close to the original, and threw any further concern for dead-on accuracy out the window and started sketching the BATHER by Jean-August-Domingue-Ingres, 1780-1867.

Below Left is Ingres’s and on the Right is my version of the Bather.

I chose it to, once again, develop better flesh colours, be more subtle.

Ingres had a reputation for manipulating anatomy (right or wrong) to fit his sense of composition and he was skillful at it. He was criticized for his classical painting style but over time he blew the critics away.

An artists vision is persistent and worthwhile and is often appreciated much later.